R.K.Narayan, in one of his short-essays, describes the agony of a musically-challenged man, forced to attend a Sunday evening concert of Carnatic music.

…He sits silently in his seat. He feels bored. He tries to count the electric bulbs in the hall. He studies the faces around him. He studies a watch on someone’s wrist four chairs off. He reads an advertisement board stuck on a pillar, forward and backward, spelling it out letter by letter. He sits back in a mood of profound resignation. He looks at the dais.

.. The programme is attaining its zenith; the singer and his accompanists are negotiating their way through a tortuous Pallavi. Our friend notices that the drummer is beating the skin off his palm, the violinist is jabbing the air with his elbow while attempting to saw off the violin in the middle, and the vocalist is uttering a thousand syllables without pausing for breath. A triangular skirmish seems to be developing among the three on the dais. Evidently someone seems to have emerged a victor presently, for the audience which was watching the fray in rapt attention suddenly breaks into thunderous applause. There is a stir in the crowd and a general air of relaxation as the instruments are being tuned and touched up after the terrific battering they suffered a while ago.

Our friend hopes that this is the end of all trouble, but he notices, to his dismay, that it is only a pause. The audience shows no sign of leaving. The musician clears his throat and starts once more and involves himself in all kinds of complicated, convulsive noise-making. Our friend, who had a brief moment of joy thinking that it was all over, resigns himself to it again, reflecting philosophically, “Everything in this world must end sometime, even music”. A most consoling thought.

Exactly how I felt when I was forced to sit through a marathon speech of a Chief Minister of one of the northern states, at a function in Delhi, a few weeks back. The entire speech was delivered in chaste Hindi, with not even a smattering of English words. The guy went on and on, pausing only to acknowledge the applause of his sycophants. Not only did I not understand a single word of what he said, but I found it extremely difficult to stay awake as he carried on in his cheerless, flat monotone.

My first instinct was to cut off the sound waves by the simple expedient of plugging my ears with my fingers, but refrained from doing so as I felt that this act could cause some slight embarrassment to my gracious hosts. 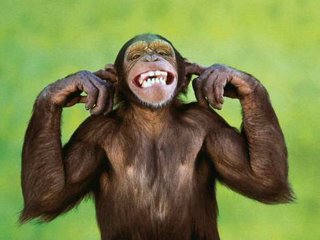 At this point in the proceedings, I realized that the situation called for more subtle methods. What would James Bond have done ? Think, think, think ,Raj, as you have never done before. It is a matter of life and death. The politician's babble must simply be contained.
I dug into my pocket, pulled out the life-protecting device that I had been saving up for such emergencies and put them on.

This brought some temporary respite, but the Chief Minister’s trained voice managed to penetrate this Gizmo-Indian defence and inflicted itself with renewed vigour.

Finally, I had to use my Brahmastra. Anticipating that some such ordeal would present itself, I had told my barber that morning to give me one of his ‘special’ haircuts. That , at last,managed to provide the much-needed relief.. 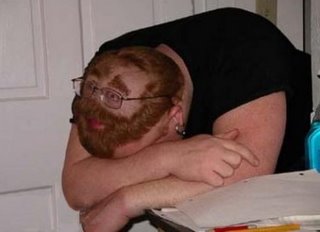 Is that you in the picture by any chance? (I mean the last one ;-))

There is something called 'tuning off', which I do brilliantly.(absolutely no humility here) I can even nod at suitable times, as if I am totally listening to everyword, while my mind in very far away.

thennavan, all three photos are mine, but taken at different stages of my evolution.

sowmya,I am sorry to say that, in the battle between a politician's vocal cords and Sowmya's ear drums even with the tune-out feature, the latter has no chance at all.

Tuning out needs practice and total lack of interest, I think. I manage that very well when the idiot box is on. Years of practice is required, though.

A politician's speech is something else again. :D

Had seen the photos in an email forward earlier. Needs someone like you to come up with a lovely post to go with these hilarious pictures. With the amount of meetings happening in organisations now and the chronic verbal diarrhoea people suffer from, one needs a lot more innovative ways to protect oneself from all the bull s**t one is exposed to.
Very interesting excerpt from RKN - which book is that?

u saw the monkey photo. but still you didn't restrain yourself :-)