The Budget in brief

Covering  the Union Budget is such a ritualised process for newspapers. Year after year, the format followed is the same.
Publishing the photograph of the Finance Minister arriving in Parliament to make his Budget speech, brief-case in hand, is an important  Budget-day ritual. The cameras tend to focus more on the briefcase than on the FM. The next morning all papers have to compulsorily carry this photo.

As with many Indian Parliamentary traditions, this too was borrowed from the British, as is evident from this photo and description in “Iconic Photos”:

“The most important day in a chancellor’s calendar is of course the Budget Day, now set on a Wednesday in March. The night before, he would have a dinner with the monarch, who is the first person to be told on the new budget. 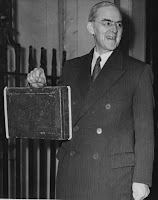 The next morning, he makes the short journey from Number 11 to the Commons after showing the assembled crowd the battered budget box. The beginning of this somewhat silly photo-op tradition dates from 1869 when Chancellor George Ward Hunt opened the Budget box in the Commons only to find that he had left his speech at home.

Why can't our FM go ethnic and carry the Budget papers in a jute bag?
Posted by Raj at 9:33 PM 3 comments:

The secret to having happy employees....

“It would be an enormous relief if the recent attacks on the science of global warming actually indicated that we do not face an unimaginable calamity requiring large-scale, preventive measures to protect human civilization as we know it” says Al Gore in this article in New York Times.
I am reminded of an incident cited by Albert Einstein in one of his speeches, soon after World War II.

I recently discussed with an intelligent and well-disposed man the threat of another war, which in my opinion would endanger the existence of mankind. Thereupon my visitor, very calmly and coolly, said to me: “Why are you so deeply opposed to the disappearance of the human race?

I  calmly and coolly, pose the same question to Al Gore: “Why are you so obsessed with the idea of protecting human civilization as we know it? And, why are you so deeply opposed to the disappearance of the human race? I suspect that you have a sinister, hidden agenda in keeping humankind the way we know it.
Posted by Raj at 12:05 PM 5 comments:

All the TV channels today have been flashing the news that Mulayam Singh Yadav had a close shave today. It appears that a cyclist suddenly appeared on the runway just as his plane was landing at the Saifai aerodrome in Uttar Pradesh's Etawah district.
But hey, what about the poor cyclist? Didn’t he have a close shave too, poor chap? You may argue that he had no business to be there on the runway, but you won’t be right. According to what a police official told the reporter of Hindustan Times, said cyclist was someone who had been deputed to shoo away a blue-bull that had strayed close to the runway. So, the blue-bull had a close shave too, though the TV channels won’t report that.
IBN’s website gets the headlines almost  right ( “Close save for cyclist as Mulayam jet hits runway), but then goes on to report what a miraculous escape Mulayam had had.
According to India Today’s site however, the cyclist was actually trying to intercept the plane as it was about to land and was even following the plane after it had landed. The only explanation for this behaviour, of course, is that the cyclist mistook the plane for the blue-bull and was faithfully obeying instructions that he should shoo it away.
Can we refer the matter to a third umpire ( say, someone from Gillette) to decide who among the three had the closest shave? Mulayam, the cyclist or the blue-bull?
Posted by Raj at 6:57 PM 3 comments:

Parliament should be a microcosm of society. The mix of elected representatives must be reflective of the regional, linguistic and religious demographics and – thanks to the Women’s Reservation Bill- even the gender demographics of the nation. I am all for this.
A demographic dimension that doesn’t seem to draw much attention, however, is the age profile. According to a report published in September 2009, 30.1% of India’s population is between 0-14 years of age. The median age is 25.1. So, it is fair to conclude that half the population is less than or equal to this median age. Whereas the average age of the members of the Lok Sabha is 53.2. (I couldn’t get the median age that would have avoided the distortion caused by outliers like Ahmed Hamdullah Sayeed who is only 26 or Ram Sundar Das who weighs in at 88.)
But the good news is that the women can make a difference. The average age of the women MPs is 47, while that of the male MPs is 55. As the % of women MPs goes up from 10% at present to 33%, the average age will come down.
To force the issue, how about a Bill that will mandate reservation of 33% of the seats for candidates below 35 years of age? A Venn diagram of a circle representing 33% of seats for women intersecting another circle of  candidates below 35 will ensure a good percentage of young women in Parliament. The TRP rating of the Lok Sabha TV channel will also go up.
Posted by Raj at 11:05 AM 1 comment:

"On the state of female society in India"

On the occasion of Women’s Day (ok, I am a day late), here is an extract from the chapter titled ‘the state of female society in India” in the book “Essays relative to the habits, character and moral improvement of the Hindoos” published in the year 1823. It discusses the practice, prevalent then,  of getting girls married at the age of six or seven.

The natives contemplate the birth of a daughter with far less satisfaction than the birth of a son, more care and attention being requisite to secure her early settlement in life, and more disgrace being attached to delay. Hence her parents are occupied with solicitude on this subject from the moment of her birth; and at the time when in civilized countries her education would commence, arrangements are in progress in India for her marriage. The young female is therefore not only deprived of every opportunity for mental cultivation, but is snatched at an early period from all the benefit of paternal instruction. Long before her intellectual faculties are matured, she is buried in domestic avocations, to the loss of all future hope of improvement. Subjected to no course of rigid discipline, and, except in the unimportant vagaries of childhood, to no parental direction, she is dismissed into life, and becomes mistress of her own actions with all those evil propensities in full vigour which inevitably entail misery; for though she continues at home for some time after her marriage, her parents have parted with the power, and perhaps with the wish, of correcting her follies. Thus she takes her station in life years before she is fitted for it, and is elevated to the state of a wife amidst the follies of infancy.
It is melancholy to reflect on the early extinction of happiness which this system occasions. In the life of a female, what season is more calculated for enjoyment than that which elapses between the period when her mind begins to expand, and that of her entering upon the severer duties of life? At this season every thing wears an aspect of gaiety and loveliness; the absence of care induces the highest cheerfulness, and gives free scope for the enjoyment of that unalloyed felicity, which comes but at one season of life. The pleasure which a married state affords from a conscientious performance of its duties, however serene in its nature, is still tempered with the burden of its cares. In India, this season of youthful enjoyment comes not for the female: scarcely has she time to look abroad, and inhale the sweetness of life, ere she is plunged into the rigid duties and severities connected with Indian wedlock. At the early age of six or seven, her happiness is often sacrificed at the shrine of family honour, while she herself is an unconscious spectator of the transaction.

Later, in the same chapter, the writer observes that this horrible practice had not existed in India in ancient times.

From the early records of Hindoost'han there is strong reason to conclude that in ancient times many of the odious peculiarities in the present system of educating and marrying females had no existence; that women, at least the daughters of kings and the wives of heroes, were taught to read; and that their own inclination, not that of their parents, influenced the selection of husbands. In the historical records of the Ramaywna, the Mtthabharwta, and the Pooranas, we meet with no heroine in the disgraceful situation of modern females. They are generally represented as deeply skilled in learning, often willing to display their attainments, and not averse to a combat of skin with the other sex. Nay, in many cases, they enjoin a literary victory over themselves, as  the only price at which the suitor can expect success.
The spirit of that age must have been much more liberal than that of modern times; since few writers who courted the attention of their fellow-countrymen, would have ventured on so bold a departure from popular practice. And though the heroines of the song were the daughters and relatives of rnonarchs, no one who estimates the power of influence which irresistibly draws the lower orders into a servile imitation of their superiors, will conclude that a knowledge of letters was then confined to palaces, or that a practice which received the praise of poets and the sanction of princes, was not in some degree of general application. A different spirit must have animated the ancestors of the Hindoos, to have produced such splendid results of the cultivation of female intellect as exist on record. The contempt with which they are at present treated, could scarcely have existed in an age which owed some of its literary splendour to their compositions. Nor can we suppose, that the female authors of that period were the only individuals of their sex to whom a knowledge of letters was communicated ; the beneficial result of granting them an education, must have contributed to render the practice more general.