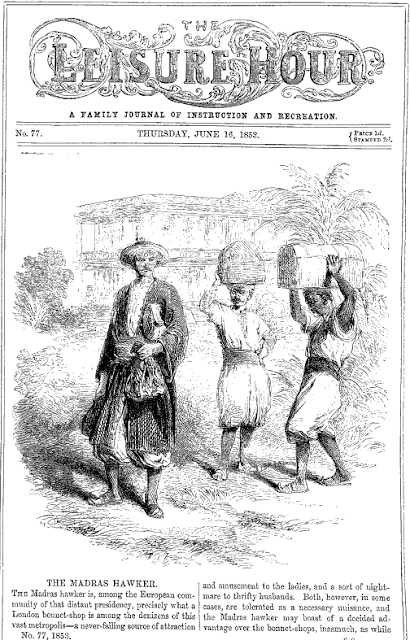 “The Leisure Hour” in its issue of  June 16, 1853 (page 385) has this charming description of a “Madras Hawker” and how he manages to sell his goodies to the lady of the house, with the connivance of the servants of the house.

Visiting hours are over at Madras by 2 pm, and the mess dinners are usually at three. At this juncture, the lady of the house, worn out with the excessive heat of the afternoon, will generally be found reclining listlessly upon a sofa, fanning herself: the weather being too oppressive even to read, the last book from the circulating library has perhaps dropped upon the floor, and there lies unheeded and unread. A victim to ennui, she is just dozing off, and the native ayah has been summoned to fan her mistress with a cuseus fan, when, lo! this listless state of apathy is agreeably broken in upon by the cry of, "Hawker, maam! very good things to-day, maam!"

The ayah is immediately despatched into the verandah to summon the hawker into her mistress's presence. In comes the hawker, all smiles and salaams, redolent with sandal-wood and other perfumes, and his moustache shining with the best Rowlands' macassar (which he has purloined from his stock-in-trade, making good the deficit j with common cocoa-nut oil); his nose is surmounted with three gaily-coloured streaks, one green, one yellow, one red, and in addition to these  he has sometimes a brilliant wafer stuck between his eyebrows: these are symbols of his high caste, for the hawker always is, or always pretends to be, a lineal descendant from the highest Brahmin families.

As regards his costume, our hawker is the beau ideal of Indian dandyism; his under-coats are finest silk, his nether garments cambric, whilst his long surtout, which fits tightly to the body and arms, is made of the finest flowered book muslin. The coolies that carry his boxes are not quite so elegantly clad; but these plebeians are only permitted to deposit their loads on the flue rattan matting, when they are expelled from the house, as much to their own satisfaction as to that of anybody else, for they immediately indulge in a much loved siesta, and, stretched beneath the shade of some mango trees, snore away the hour occupied by their employer in profitable bargains.

Meanwhile the hawker, having seated himself, undoes the cording of one of his three boxes, which he then opens. Click goes the lock with a loud spring, and up flies the cover, exposing to the anxious gaze of the lady-patroness the hidden treasures within. The hawker seats himself tailor fashion, and extracting a rupee from his moneybags, hits it against the lock until its clear silver tones ring again. This he does, as he will tell you, for custom's sake. Now servants who have interests at stake in this identical custom linger about the ante-chambers, peep through doors and windows, and listen, so that not a fraction be lost; occasionally too they compare notes, and not infrequently disagree in their reckonings.

"Now, hawker," asks the lady, "what have you got to sell to-day"

The hawker, who has a very good colloquial knowledge of English, invariably replies: "Very fine things, marm," and then, carefully unpacking the first trunk, these "very fine things" are one by one exposed to view.

"Fine book-muslin, marm; two rupees a yard." Of course two rupees is about ten times the value of the article displayed; but then, like all orientals, the hawker must be beat down, and as he has occasionally caught the unwary at his first offer, he thinks he loses nothing by making exorbitant demands.

The book-muslin is passed over as not required, and then comes jaconet, dimities, cambric, polampoors, silks, satins, palmarinocs—in short, a little of all things, including scents, soaps, hair oils, and even curry-combs and brushes for horses. Whenever anything is purchased, and the terms cannot be agreed upon, then the hawker conciliates the lady of the house by telling her that it shall be sold for whatever "missus pleases," and then the ayah is referred to as a kind of umpire, who usually, of course, decides in favour of the hawker, from the simple fact that the more money he gets the greater her share of the custom is likely to be.

The first box has now been emptied, and the hawker has only sold to the amount of about thirty rupees. He shakes his head and murmurs audibly as he replaces the things, that it is very bad gain for him to-day, forgetful perhaps that fifteen out of the thirty rupees have been net profit to him.

The second box is next opened, and the baby screams with delight, for the hawker craftily displays the worst commodities first, shrewdly calculating that, if he can sell any of these, he is pretty sure of disposing of the others. What an assortment of toys does the hawker reveal! Dolls with eyes that open and shut, whole regiments of mounted cavalry carefully boxed up, ill-grown trees and houses, shepherds and sheep, lions, tigers, and all four-footed animals living on peaceable terms together, all within the precincts of large empty wafer boxes; and, best of all, a ready-cooked dinner for baby, comprising fictitious joints and turkeys. The small darling turns crimson with delight as the fond mamma pays the hawker for three or four of the largest boxes, and then the child and its treasures are handed over to the care of the amah (nurse) in the bed-room,' and the mother has at least purchased a few minutes' tranquility. Under the toys there are laces; under the laces, ribbons; under the ribbons, note-paper and ivory fans; and then a miscellaneous collection of goods, such as The Keepsake for 1831, the Souvenir for 1823, a view of London previous to the great fire, and a book or two of the fashions in 1779.

Upon the whole, the hawker makes unexceptionable bargains, so he displays more alacrity in undoing the third box, and it is now mamma's turn to play the child. "Oh, what a love of a dress!" exclaims the lady, as some Costly ball-dress catches her eye. The hawker perceives the admiration and turns it to account; and we are much mistaken in the man if he does not earn cent, per cent, by the bargain. Then come artificial flowers, Trichinopoly gold chains, and other jewellery; so that if the lady of the house be a Barra Bebee Sahib, or the wife of a wealthy civilian, he has sold to the amount of a thousand rupees before closing and strapping the last box; and if only a subaltern's lady, why a month's pay may be set aside for that evening's divertissement.

His business thus transacted to his satisfaction, the coolies are again burdened, and the boxes are heavier, for the cash far outweighs the goods disposed of. The hawker makes his salaams and withdraws, and two minutes after a frightful wrangling is heard in the compound; the twenty servants, like so many vultures, have pounced upon their prey; the sturdy coolies are waylaid.

One would think from the noise that there was murder being committed; but this is only paish (Tamul for talk). No Frenchman could compete with them for gestures. Suddenly there is a .lull, for the parties have agreed to treat under a banian tree; the boxes are placed upon the ground, and the disputants squat round them. After five minutes' mild argument, in which the hawker vainly endeavours to persuade his listeners into a belief that he has been rather a loser than otherwise by the bargain, he offers them one-tenth of what the servants, according to established usage, have a right to expect. This offer is received with violent acclamations, and a perfect roaring ensues, until eventually the hawker is compelled to comply with the usage, whereupon he is suffered to depart, and the servants get up a small scene amongst themselves about the proportioning of the said profits.