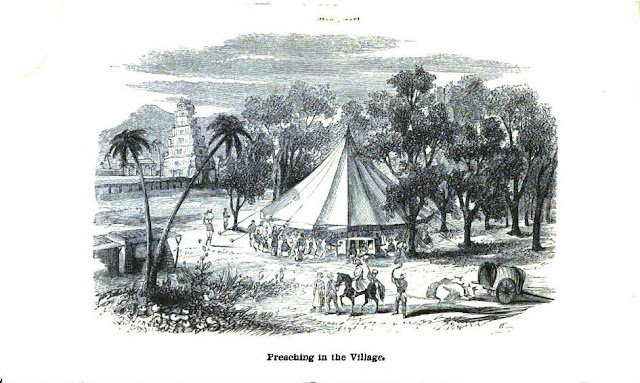 Dr. Rev John W Dulles, a Christian missionary, set out from America one day in the year 1850 and arrived in Madras 130 days later. His avowed objective was to spread the gospel of Christ and liberate the poor masses out of their misery. He spent 4 years in India, mainly in the South, and later published a book called “Life in India” in which “he sought to show how he the missionary reached the shores of Southern India; what sights and sounds greeted him on landing; how Hindus lived, acted, and worshipped; in what ways they were approached by the missionary; and what were the effects of his labours among them.”

As can be seen from the narration below ( pages 174-179 of the book), the conversion of the natives was not an easy task. The Hindus had an exasperating habit of countering every argument with a metaphor and make the poor missionary throw up his hands in despair.

Here is Rev Dulles describing one of his meetings: (I urge you to read this with a humorous bent of mind and  not to take sides).

You reach a favourable spot, and take your stand on some slight elevation—a housestep, a plank, or a block of wood or stone. The passing throng stops to hear what the padre has to say. Some rude fellows try to make sport; but the respectable old gentleman with the big turban and white robe bids them be silent, or go about their business. The coolie with a load on his head and the drops of perspiration standing on his brow, and the scholar with his books under his arm, the shop-keeper, the mechanic, and even a Brahmin or two, stop to listen to your discourse.

Your theme is the folly of idolatry; you expose its absurdity and impiety, you deride the senseless block in the temple just before you, and ask them why immortal, soul-possessing men should bow down to a soulless, senseless, tongueless idol. The coolie grins; the carpenter nods approbation. "Why, indeed!" says the bazaar-man; "this is the iron age." "It is our folly," exclaims the scholar.

"But," asks the stout, oily Brahmin at your right, "do you not believe that God is everywhere?"

The poor coolie did not before know how philosophic a thing idolatry was, and nods his approbation; so do others.

This logic, however, does not satisfy you. You remark that if, because God is everywhere, he is to be worshipped as in the idol, for the same reason they must worship every stone in the street, every tree in the tope, (grove,) every dog in the street, and even the polluted leather shoes to which they would not touch a finger. Moreover, if God be everywhere, and hence in the idol, why is it that you, my Lord Brahmin, must be called, after the image has been made, to bring the god into it with your Prana Prathishta? Truly it is a waste of money to pay you for thus getting the god in, when he is already there."

The coolie and his fellows smile again at this cut at the Brahmin. He, however, is in no wise disconcerted. "Ah!" says he, "you are labouring under the mistaken idea that we worship the stone. Are we fools? Do we not know that stone is stone, and God is God? Idiots may worship blocks—we do not. But where is God? Will you show him to us? Who can see him? How, then, shall the unthinking mob, the untaught, grovelling mass, worship him whom they see not? The idea of an unseen, intangible God is too abstract for them; they cannot grasp it. Devotion will die unless we give the vulgar mind something actual on which to rest. Therefore we give them idols. The mind is concentrated on this, and thence ascends to God."

Rev Dulles then describes another incident involving one of his brethren.

An account of a conversation of a missionary in Bengal with a Brahmin, whom he fell in with while preaching, gives a good idea of their mode of argumentation, and also of the importance of understanding their belief, that we may not be put to silence by them.

The missionary, in answer to the question, "What do you preach here?" replied, "We teach the knowledge of the true God."

The missionary thought it would be an easy matter to confuse him, but he soon discovered his mistake. "This is very extraordinary," said he; "are you the Almighty?"

"No," he replied: "had I created the sun I should be almighty; but that I have not done."

"How can you pretend to be God, if you are not almighty?"

"This question shows your ignorance. What do you see here?" said the Brahmin, pointing to the Ganges.

"And what is in this vessel?" at the same time pouring out a little into a cup.

"This is water, likewise."

"What is the difference between this water and the Ganges?"

"There is none," replied the missionary.

"Oh! I see a great difference; that water carries ships, this does not; God is almighty; I am only a part of the Godhead, and therefore I am not almighty; and yet I am God, just as these drops in the cup are real water."

"According to your teaching," said the missionary, "God is divided into many thousand portions; one is in me, another in you."

"Oh!" said the Brahmin, "this remark is owing to your ignorance. How many suns do you see in the sky?"

"But if you fill a thousand vessels, what do you see in each?"

"But if you see the image of the sun in so many thousand vessels, does it prove that there are a thousand suns in the firmament! No; there is only one sun in the heavens, and it is reflected a thousand times in the water.
So likewise there is but one God, and his image and brightness are reflected in every human being."

The missionary, instead of trying to point out the falsity of the comparison, wished to touch his conscience.

"I am not," replied the Brahmin, "I am doing many things that are wrong, and that I know to be wrong."

"Oh!" said the Hindu, "I see that you need a little more intellect to be put into your head before you can argue with us. God is fire—fire is the purest element in creation; but if you throw dirt upon it, a bad odour will arise; this is not the fault of the fire, but of that which is thrown upon it. Thus God in me is perfectly pure, but he is surrounded by matter, (that is, by the material, corporeal body;)  he does not desire sin, he hates it; the sin arises from matter."

It is often a shorter and surer way to answer these sophistical pantheists and transcendentalists with ridicule. To argue with them is an endless undertaking; a good-humoured cut at their pretensions is far more efficacious; and if it be a fair hit, will secure to yourself a hearing and the sympathy of the audience.

as usual raj your findings stun me .. this was bloody hilarious, the common street fellow had so much wit!!