I was with two of my colleagues yesterday at the open-air restaurant of the Taj Garden Retreat, Madurai, when this magnificent creature descended from somewhere, looked in our direction, quickly sized up our potential, ruled us out as prospective mates, decided against a display of its full plumage and majestically settled down on the railing close to us. 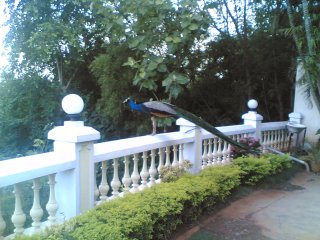 One colleague concluded that Lord Muruga was making a pit stop while gallivanting on his ‘ vahana’ to bestow special and customised blessings to his loyal devotees, not to mention devote loyalees. So, the said colleague closed his eyes, folded his hands, and bowed reverentially, chanting “ Muruga, Muruga”, much to the bemusement of some foreigners in the adjoining table.

The other colleague, being of a more practical bent of mind, reached for the bowl of peanuts and threw out a handful to the bird which accepted the offering without too much of a fuss and conveyed through its authoritative body language that it was rightfully entitled to the meal.

And I? I had the presence of mind to go a few steps nearer and take a quick snap on my mobile phone, before the bird took off gracefully, continuing on whatever noble mission it was engaged in.

This is one of the reasons you should have a camera of substantial resolution on your phone, and not just a camera.

A similar thing happened when a friend was in the Mumbai airport and caught sight of Hrithik and Aishwarya enroute to London for a shooting of Dhoom-2. He shot himself with them, but the quality of the snaps are such - they look as if morphed.

Sorry for digressing. I wish it had unfurled the full splendour of its plumage.

Viky, thanks. I guess that it reserved the ritual of unfurling its plumage, for more interesting creatures, such as a peahen.

Lovely picture, Raj. And your response is the only sensible one.

Thats the advantage of having devout loyalees for your blog. Seems feeding the peacock is a senseless thing.

After all, what is if of any use for us readers, if the peacocks eats or not.. As long as we have some picture to look and read your observations..

And no offence to lalita.